America is set to become a net exporter of traditional energy by 2022, according to the U.S. Energy Information Administration (EIA) in its recently released Annual Energy Outlook report. This means that the U.S. could export more traditional energy products – like natural gas and oil  – than it imports, helping to fuel economic growth. In fact, in 2017 alone the U.S. exported more natural gas than it imported. Not since 1957 has this occurred. Agency data reports that natural gas imports increased by 1.1 percent between 2016 and 2017, but natural gas exports increased by 35.6 percent! 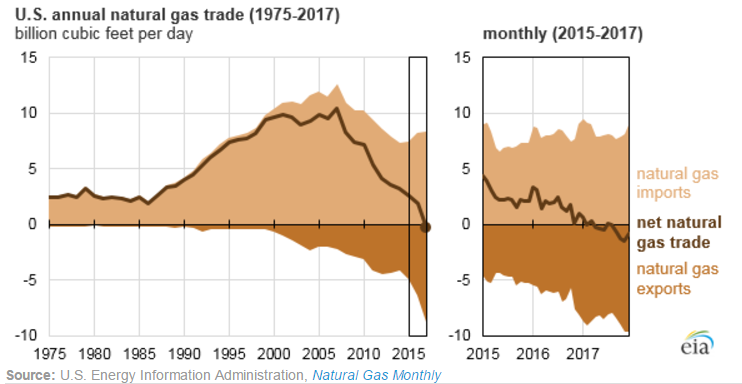 America’s natural gas and oil export capacity helps build the United States’ share of market relative to other producing countries. In 2017, U.S. crude oil exports went to 37 destinations, up from 27 destinations in 2016. India, which did not receive any shipments in 2016, tied with Spain as the tenth-largest recipient in 2017. Canada remained the largest destination for U.S. crude oil exports, but shipments continued to increase to other regions including Asia and Europe.

As we get closer to becoming a net exporter of natural gas and oil, this not only ensures that U.S. jobs are protected, but that the price of energy is more stable and less susceptible to events that create price spikes. This is encouraging news for America’s economy and communities across the country.