Home Where We Operate Alaska

We have a long and proud history in Alaska. As the state’s largest oil producer, we have been a significant player in exploration and development in Alaska for over 50 years. Using innovative ideas and the latest technology, we continue to seek new and better ways to responsibly deliver Alaska’s energy potential.

We are also one of the largest holders of federal and state leases in Alaska, with significant interests in the National Petroleum Reserve-Alaska (NPR-A), as well as other undeveloped acreage on the North Slope. We have drilled more than 70 exploration wells in Alaska since 2000, including 42 in the NPR-A, and we constructed the first development there on federally owned land.

Our primary North Slope assets include the ConocoPhillips operated Kuparuk and Alpine fields. Additionally, we have significant interests in the Prudhoe Bay field and the Trans-Alaska Pipeline System. With the development of the CD5 drill site, we expanded our Alpine field to the west, across a channel of the Colville River, to become the first company to commercially produce oil on Alaska Native Lands from within the boundaries of the NPR-A. In addition, we are continuing efforts to develop the Greater Mooses Tooth Unit located entirely within the NPR-A.

Innovation in the Arctic

Part of the Alpine Field, CD5 is the first commercial oil development on Alaska Native lands within the boundaries of National Petroleum Reserve-Alaska (NPR-A). CD5 is exceeding its original production target of 16,000 BOPD gross, and is currently producing approximately 37,000 BOPD gross average, year to date.

The project also added approximately 700 new direct jobs during construction and hundreds more support jobs. ConocoPhillips is continuing to evaluate further exploration and development potential in the NPR-A area and is advancing development in the Greater Mooses Tooth (GMT) Unit. GMT1 achieved first oil production ahead of schedule, on October 5, 2018. The development includes a new gravel pad, a 7.8-mile road, and pipelines connecting it to CD5 and the Alpine Processing Facility.

GMT2 is a satellite drill site and the second project proposed to be developed in the Greater Mooses Tooth Unit. On October 25, 2018, the company approved GMT2 for funding. Current plans call for connecting GMT2 to the Alpine production center for processing via GMT1 and CD5 infrastructure. GMT2 has potential for up to 48 wells. And is estimated to cost >$1 billion to develop. First oil is planned for late 2021 and estimated peak production is 35-40,000 BOPD. Over the two winter construction seasons, GMT2 will generate approximately 700 jobs.

In January 2017, ConocoPhillips announced a significant new oil discovery named Willow. Willow is in the Bear Tooth Unit in the northeast portion of the National Petroleum Reserve -Alaska (NPR-A). The original Willow discovery wells, Tinmiaq 2 and 6, were drilled on federal leases in early 2016. After a successful 2018 exploration and appraisal season in the Greater Willow Area, ConocoPhillips Alaska released the resource estimate to a range of between 400-750 million barrels of oil equivalent (MMBOE). Development of Willow could generate hundreds of direct jobs and thousands of construction jobs, and produce substantial revenue for the federal government, State of Alaska, North Slope Borough, and communities in the NPR-A.

Read more about the project

ConocoPhillips has been a significant player in Alaska for more than 50 years. As the state’s largest oil producer, we’ve demonstrated an ongoing commitment to responsibly developing Alaska’s resources. The Willow project, on Alaska’s North Slope, is one of the company’s most recent exploration successes. The proposed Willow development is approximately 30 miles west of the Alpine Field in the National Petroleum Reserve-Alaska (NPR-A). Read more about the original project plans here and how we updated our plans is response to stakeholder concerns here.

Willow will be the first development in the Bear Tooth Unit, located in the northeast portion of the National Petroleum Reserve-Alaska (NPR-A). ConocoPhillips plans to invest $4-6 billion in constructing and developing Willow.

Construction activities could span more than seven years, and at the peak, these activities could employ as many as 2,000 people. Long-term, the project will create hundreds of permanent jobs. According to BLM estimates, Willow could generate more than $10 billion in new revenue for the federal government, the State of Alaska and the North Slope Borough.

ConocoPhillips has consistently proven that we can operate on Alaska’s North Slope safely, responsibly and sustainably. The project is designed to have minimal impacts. Data collected since ConocoPhillips first started development in the Colville River Delta with the Alpine field shows that subsistence lifestyle is thriving, and subsistence harvests are equal to or greater than before Alpine. In addition, air quality of the North Slope is consistently better than national ambient air quality standards and wildlife populations are healthy.

We reliably meet all local and federal environmental mandates, including rigorous adherence to approximately 270 mitigation and best practices currently in place for the NPR-A. We work in close collaboration with regulatory agencies and other interested stakeholders to design and build infrastructure that minimizes disturbance to wetlands and the unique benefits they provide. In addition, Willow will be one of the first North Slope projects designed and built in compliance with new EPA rules that reduce volatile organic compounds and methane emissions.

ConocoPhillips also has a long history of working with the village of Nuiqsut and the other North Slope villages. We work diligently to build inclusive, honest and respectful relationships with our North Slope stakeholders and engage with them openly and transparently in order to promote understanding of our activities, learn more about local concerns and collaboratively seek solutions. We believe the relationships we have developed with North Slope residents are mutually beneficial and provide the basis for understanding and working together.

In addition to stimulating economic growth, Willow will also promote U.S. energy security by increasing domestic oil supply. If approved, the Willow project could produce in excess of 100,000 barrels of oil per day.

Additional oil production will also help keep a key piece of U.S. infrastructure, the Trans-Alaska Pipeline System (TAPS), economically viable. The estimated production rate from Willow would be about a 20% increase over current TAPS throughput.

Our industry is highly regulated at all levels – projects in the National Petroleum Reserve-Alaska (NPR-A) are facing especially stringent regulations. There are ~270 mitigation measures and best practices already in place for NPR-A development. Subsistence activities are respected and protected, with approximately half (11 million acres) of NPR-A unavailable for oil and gas leasing to protect bird and caribou habitat as well as subsistence hunting.

The BLM track record of escalating cost could eventually drive responsible oil and gas development out of NPR-A. Projects in the NPR-A should not be burdened with excessive or unsupported/unfocused mitigation requirements and projects should go through the permitting process as efficiently and in as timely a manner as reasonably possible. Many Alaska Native communities and entities are supportive of NPR-A development and the revenue it generates for community projects.

Resource development on Alaska’s North Slope is unique in many ways. Benefits from resource development – such as public royalties, taxes and revenue sharing – are much more likely to directly impact the local population than in other areas.

The State of Alaska relies on revenue from resource development to support basic services and the economy in general. The state budget lingers in a precarious position, but increased investment due to tax changes in 2013 is resulting in jobs, production and improved State revenue outlook. Without new investment in developments, oil production will be negatively impacted, as will Alaska’s economy.

We plan for continued investment on the North Slope, with new rigs and several multi-billion dollar projects in the planning stage. But high costs, an unstable tax environment and federal overreach threaten the economics of these projects. Layers of bureaucracy, constantly evolving federal regulations – not laws – that are ill-defined and subjective, and uncertainty within the state tax structure create a challenging environment. Continued investment will require a stable fiscal environment, and predictable regulations.

We take pride in being a great neighbor and a responsible corporate citizen in the communities where we live and work and contribute to the well-being of Alaskans through charitable giving, employee volunteerism, and civic leadership. In 2018 we donated more than $3.6 million to approximately 254 nonprofit groups across Alaska. 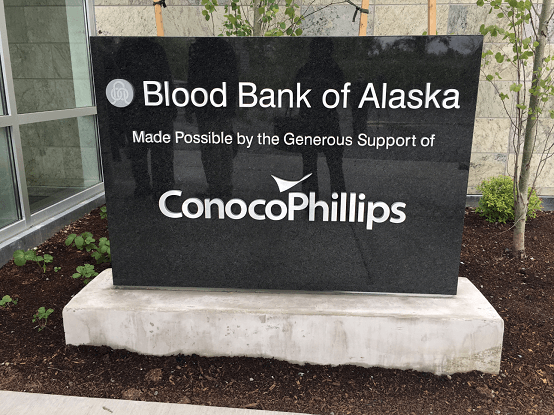 Since 2000, we have invested $128 million in Alaskan communities as well as more than 3,500 employee volunteer hours per year.

We work diligently to build inclusive, honest and respectful relationships with our stakeholders, particularly with our North Slope neighbors who live near our operations. We engage with them openly and transparently in order to promote understanding of our activities, learn more about local concerns and collaboratively seek solutions.

Read more about our community involvement on the Western North Slope.

We place the highest priority on the care and protection of the environment. The harsh arctic conditions create unique challenges – and opportunities. Over the years, we have developed innovative technologies that minimize our effect on this unique land. We also work to ensure that Alaskans benefit from our efforts – not only in the form of a solid economy, but also through contributions to communities and education.

We have developed innovative technology that minimizes our effect on the environment of this inimitable land. And we believe arctic exploration and development must be conducted at a measured pace that matches available technology, with major emphasis on environmental stewardship. The only way to truly protect the environment is to study it and understand it. Working with federal, state and local regulators, as well as local communities, we routinely develop and conduct multi-year baseline environmental studies programs. Our ongoing world-class research programs help us understand the environment and identify better ways to protect it.

When it comes to minimizing the company’s environmental footprint, no idea is too small and industrial operations aren’t the sole focus. ConocoPhillips Alaska is working hard to ensure that the company’s philosophy on the environment is part of the culture for all employees at all Alaska facilities. From reducing the size of our North Slope drilling pads to installing energy efficient lighting, recycling and using eco-friendly cleaning products, ConocoPhillips is working to be the best environmental steward it can be at all levels of the organization.

In 2016 we contracted for a new Extended Reach Drilling (ERD) rig. The rig will initially target development of Fiord West, a field northwest of the main Alpine pad, and can be deployed anywhere on the North Slope. The ERD rig represents the third new-build drilling rig ConocoPhillips has contracted for since tax reform in Alaska was passed in 2013. The new ERD rig will increase the area that can be developed from a drill site from approximately 55 square miles to as much as 154 square miles. Use of the ERD rig will decrease the footprint of development, minimize environmental impact, and allows for fewer drilling pads. 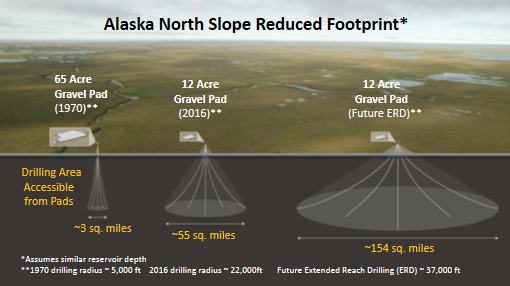