Home Where We Operate North Dakota

The Bakken is a sequence of sand and shale layers in the Williston Basin, which stretches across portions of eastern Montana, western North Dakota and Canada. We have approximately 620,000 net acres in the Bakken, which include about 435,000 net mineral acres and approximately 185,000 net leasehold acres.

Bakken employees have led the way in engaging with stakeholders at all levels — from township to federal. They have developed authentic relationships in the community where they live and work by demonstrating their commitment to being good neighbors. Get a glimpse into a day in the life of three employees based in North Dakota — David Greef, Rachel Logan and Brad Johnson. Whether it’s how they work to ensure safe and responsible operations or their commitment to environmental stewardship, the company’s SPIRIT Values guide their actions every day. Watch the video here.

North Dakota ranks second in the nation in oil production. This production stimulates economic activity and provides jobs across the state and throughout the country.

According to the North Dakota Petroleum Council, our industry directly supported 24,012 jobs in 2014. That number grows larger when you factor in that each drilling rig creates about 177 indirect jobs.

More than half of North Dakota’s taxes come from our industry. 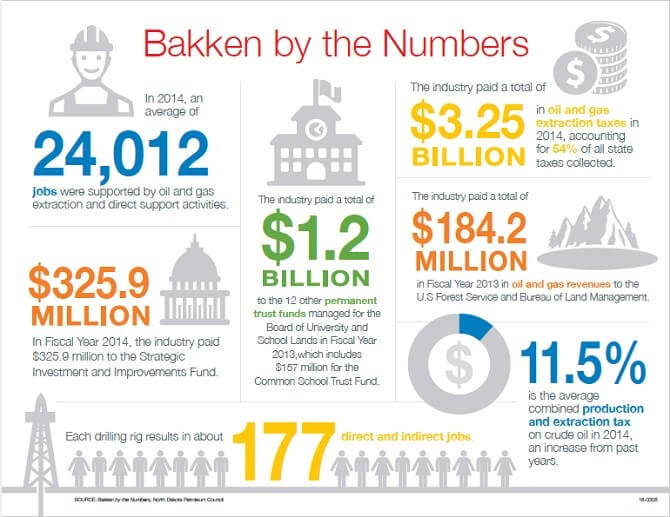 The state’s infrastructure and government also benefit from oil and gas operations: our industry provided $325.9 million in 2014 to the strategic investments and improvement fund. Schools profit as well: in 2013 the Board of University and School Lands received $1.2 million from our industry.

We contribute to the well-being of North Dakotans through charitable giving, employee volunteerism, and civic leadership. In 2016, we awarded more than $300,000 in philanthropic grants to organizations in the Bakken Basin.

We take pride in being a great neighbor and a responsible corporate citizen in the communities where we operate. And we work diligently to build inclusive, honest and respectful relationships with our stakeholders by engaging with them openly and transparently to promote understanding of our activities, learn more about local concerns and collaboratively seek solutions. Through community meetings, updates to local governments, and one-on-one conversations with community members we create open lines of communication.

Flaring is the safety practice of burning off excess gases that might otherwise pose a hazard and that cannot be:

Installing flaring equipment to burn the excess gas reduces the greenhouse gas impact to the environment by as much as 98 percent. We’ve adopted goals to address flaring and venting in our Climate Change Management Plans.

Across all types of wells and reservoirs in the U.S., less than 1 percent of natural gas is flared. However, newer unconventional shale plays like the Bakken in North Dakota and Montana have higher rates of flaring due to a lack of pipeline infrastructure.

The North Dakota Petroleum Council flaring task force has worked with the state to develop a plan to reduce flaring in the Bakken with the goal of capturing 85 percent of associated gas by 2016 and 91 percent by 2020. Over the last 10 years more than $11 billion has been spent building natural gas gathering and processing infrastructure in the state.