Natural gas is safe and is one of the cleanest and most commonly used forms of energy.

It has been proven safe to produce and transport for consumer, commercial and industrial uses, as well as electrical power generation. The unique characteristics of natural gas contribute to its excellent safety record.

It is a gas, comprised of hydrocarbons, that has formed naturally underground.

A colorless, odorless combustible mixture of hydrocarbon gases, it consists primarily of methane (CH4) and can also contain other valuable industrial gases such as ethane, propane, butane, and pentane.

Use of natural gas for energy is good for the environment.

Increasing the use of natural gas in the energy mix is the fastest and most economical path to significantly reduce U.S. greenhouse gas (GHG) emissions, particularly carbon dioxide (CO2).

According to the U.S. Environmental Protection Agency (EPA), natural gas used for power generation produces half as much carbon dioxide, less than a third as much nitrogen oxides, and 1 percent as much sulfur oxides at the power plant compared to the average air emissions from coal-fired generation. In addition to reduced air emissions, natural gas has other environmental benefits that make it a smart fuel choice. Natural gas-fired power plants use about 60 percent less water than coal plants and 75 percent less water than nuclear power plants for the same electricity output. 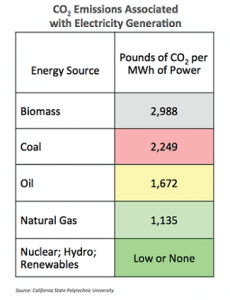 Plants that use natural gas to produce electricity lessen some challenges associated with solar, wind, hydro and nuclear power generation, such as visual impact, competing land uses, bird strikes and waste disposal. Natural gas is the fastest and most economical path to significantly reducing U.S. emissions of carbon dioxide from power generation, while minimizing impact on the land and use of our water resources.

Another benefit of natural gas-fired generation is its reliability and versatility. It fills the gap as a backup source and makes it possible for the U.S. to use renewables. Natural gas generation can be turned on and off quickly to match demand, can be built in cities near the demand, and can generate power year-round regardless of weather conditions. Wind and solar only produce electricity intermittently, and they require additional infrastructure such as battery storage to provide power at other times. Natural gas is a cheaper and more reliable option to provide power when renewables are offline and to meet peak demand in combination with renewables. By teaming up with natural gas, renewable energy generation can continue to grow.

In addition to being used to generate electricity, heat homes and businesses, and fuel vehicles, natural gas serves as a raw material for products such as plastics and fertilizer.

The U.S. is the world’s top producer of natural gas.i Over the last decade, drilling and well completion techniques have revolutionized the natural gas industry, opening up extensive new sources of domestic shale gas production. The Energy Information Agency estimates the US has over 90 years of domestic supply available.ii Additionally, the natural gas industry adds about $550 billion to the national economy and supports over 4 million jobs.iii

The U.S. Energy Information Administration (EIA) data indicates that 2016 was the first year that natural gas-fired generation exceeded coal generation in the United States on an annual basis.iv Natural gas now accounts for over one-third of all the power that is produced in the United States, contributing to decreasing carbon dioxide levels in the air to the lowest they have been in nearly 25 years.v The U.S. EPA 2019 Greenhouse Gas Inventory (GHGI) notes that increased use of natural gas has helped decrease emissions.

“Recently, a decrease in the carbon intensity of the mix of fuels consumed to generate electricity has occurred due to decreased coal consumption, increased natural gas consumption, and increased reliance on non-fossil generation sources.”vi

In all the World Energy Outlook scenarios, demand for natural gas is predicted to increase over the next decade.vii

This increased demand is primarily tied to improved standards of living across the globe as people transition from energy poverty to prosperity.

The production of electricity using natural gas requires the least amount of land for the energy provided than almost any other energy source. Wind and solar require more land to power the same number of homes as a natural gas-fired power plant.

Our industry is actively working to reduce methane emissions.

Since 1990, methane emissions from natural gas systems have dropped 16 percent during a period when production has increased 50 percent.vii This is effectively a 45 percent reduction in the rate of emissions, further demonstrating industry’s continued progress in minimizing emissions as we maximize efficiency in getting energy to the consumer.