Good news for America: a new report indicates that shale gas is helping significantly improve U.S. energy security. The Global Energy Institute’s 2016 Index of U.S. Energy Security Risk found that America’s energy security risk last year was at its lowest point in two decades. This is especially notable since the index was at a record high five years ago. You can read the document in its entirety here.

The recently released report notes, “That this lowering of risk occurred at the same time U.S. energy companies were using hydraulic fracturing, horizontal drilling, and advanced seismic imaging to coax unprecedented volumes of oil and gas from shale formations is hardly a coincidence.”

The index relies on 37 different measures of energy security risk from 1970 to 2040, including: 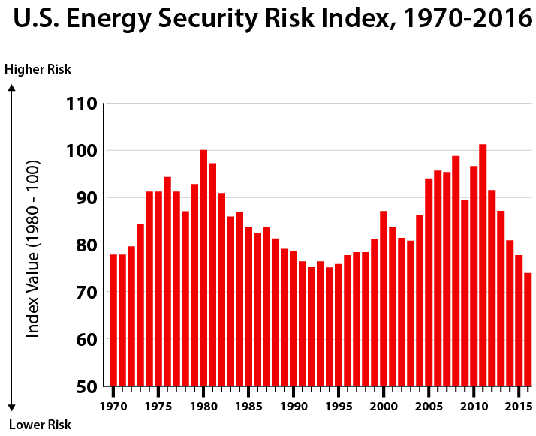 The report notes, “The 2016 score dipped 7 percent below the 30-year (1970-1999) average. Like in the preceding couple of years, greater domestic unconventional oil and natural gas production from shale formations was the biggest single factor contributing to the improved U.S. energy security picture in 2015.”

Here’s a startling statement from the report:

“We estimate that if a fracking ban were implemented, by 2022 natural gas, crude oil and wholesale electricity prices would increase by more than 400 percent. Many of the downstream industries that now rely on inexpensive natural gas would look elsewhere for supplies of feedstock and fuel, and some would close shop and move operations overseas.”

Coupled with job loss likely after a decrease in American manufacturing, that would be a huge hit for many families. Though the data in this report paints a glowing picture of current U.S. energy security, it also definitely quantifies the potential negative economic impacts of implementing a fracking ban.